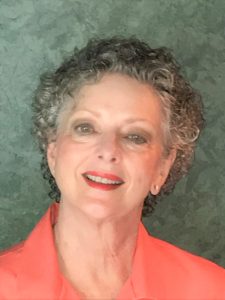 Award-winning Georgia author, Pat Nichols, was born in Champaign, Illinois, and grew up in Orlando, Florida. A writer of Women’s Contemporary Southern fiction, the first rung on the ladder toward her literary success was to serve as editor of her high-school newspaper.

Later, in the eighties, she spent three years as a public relations manager. She wrote press releases, articles, and appeared in live television and radio interviews. Looking back, she believes those experiences were building blocks for her career as a fiction writer and for the premise of her newly released book, Starstruck in Willow Falls.”

Her penchant for piano music led her to buy a piano in the eighties in hopes of teaching herself to play, but she had one big problem. “My musical ability was limited to plugging in a CD and tapping my foot to the beat. I still have the piano. I still can’t play, but it looks good in our living room.” Perhaps as you observe the above photograph, you’ll agree the piano serves as a sweet backdrop to her comfortable writing chair, and its bench—the perfect chairside assistant.

Pat’s inspiration to write was birthed out of tragedy. Nine years after retiring from a twenty-seven-year corporate career, a young woman who had drifted in and out of their lives for two decades, tragically lost her own. “As a cathartic exercise I began creating a novel loosely based on her life, but with a happy ending. During the process, something amazing happened. God planted the writing seed in my heart. Goodbye retirement. Hello new career.”

It took her a year to write her first book. “Although I pitched it to agents and publishers, it was not  publication ready. After attending conferences, connecting with other writers, studying the craft, and writing five more novels, I rewrote the story and submitted it to my publisher. Hopefully, now it will find its way to publication.”

Pat’s words of advice to writers struggling with their first book are to “Invest time in studying the writing craft. Join a critique group, such as Word Weavers International, taking feedback to heart, and adopt the discipline to write at least five days a week, integrating everything learned from studying and listening to feedback.” 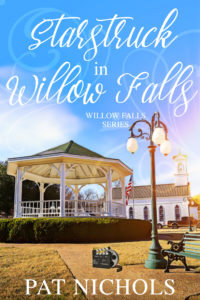 Starstruck in Willow Falls, the third book in her award-winning Willow Falls series, released this past Tuesday. The story continues to follow the lives of three women who were strangers until a tragedy and a long-held secret brought them together in The Secret of Willow Inn. Emily yearned to write a novel about the town’s unique history to attract tourists. Sadie returned to Willow Falls after serving a thirty-year prison term for killing the town hero. Rachel, raised in Atlanta, abandoned her acting dream to live the life her father chose for her. After struggling to pursue their dreams while collaborating to rescue the small North Georgia town in The Trouble in Willow Falls, Rachel and Emily reluctantly accept roles as a director’s liaisons in Starstruck in Willow Falls. Their patience is stretched to the limit by residents’ whacky reactions to movie stars swooping into town to film a full-length movie.

Pat began her author career as a senior citizen, proving it’s never too late to follow your dreams. Looking forward, “I plan to continue writing for many years. My goal? Publish at least ten books before God calls me home.”

She invites you to connect with her on her blog at https://patnicholsauthor.blog and to check out her books on her Amazon Author page.

“If you don’t invite everyone, you’ll break a lot of hearts.”

Rachel’s eyes narrowed to a slit.

“What do you mean by everyone?”

“The whole town,” Emily said as if that settled the matter.

“You’re joking, right? Sounds more like a county fair than a wedding. Maybe we should include an auction and a pie-eating contest.”