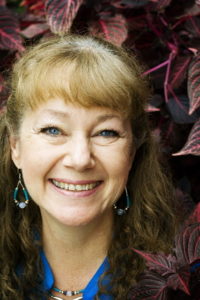 Washington native Miralee Ferrell lives right across the Columbia river from her birth place in Hood River. Today, this avid horse and nature lover lives in picturesque White Salmon, Washington with her husband, a couple of cats, sixteen chickens, and her ever-present writing companion and lap dog, Lacey.

This award-winning, best-selling author of 26 novels writes in a multitude of genres. “I started out with two women’s fiction books, no romance. Then I was contracted for four—all historical romance.” Subsequently, publishers Barbour and David C. Cook contracted her for a number of historical romance novels and novellas. Later, Cook signed her for four middle-grade horse/mystery/adventure books (Horses and Friends Series) and four historical romance novels. Two more of that series were published by Mountain Brook Ink, along with two Amish novels for TV movies, and a couple of contemporary romance books.

Miralee’s inspiration to write came during a church service. “There was a special speaker who prayed for people after the service. I went forward, and as he prayed for me he stopped and said he felt the Lord telling him I needed to be writing—he had no idea what, but it needed to be published. I spent time praying about it over the next two weeks and talked to my husband, pastor, and mom. They all agreed I should see where it led. I started with magazine articles. Several were picked up and published quickly. I then decided (with encouragement from a writer friend) to write something connected to my own life in novel form. That’s how The Other Daughter came to pass. It’s the book I know the Lord wanted published. If I’d stopped there and never written another book, I would have fulfilled what He asked. It literally poured from me, and I could barely keep up. A year later, it was under contract with Kregel and released in 2007. It truly was God who brought it about.”

One of Miralee’s contemporary Amish romances, Follow Your Heart, will air on the Hallmark Movies & Mysteries channel this Sunday, October 4th, and then again, on Friday, October 9th at 9:00 EST. She gives us the following peek into this weekend’s airing. 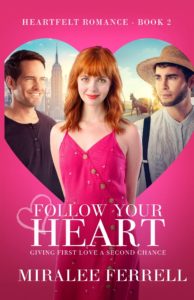 Can they give first love a second chance?

Kathy Yoder left her Amish community ten years ago and became a successful travel guide writer, which took her to exotic places around the globe. Her personal life includes a man back home who adores her and wants more than friendship, and a career she could only have dreamed of as an Amish teen. Everything seems great until a phone call comes out of the blue. The sister she hasn’t spoken to for years leaves a message telling her their father has died. The call comes too late, and Kathy missed the service—and it appears, her sister doesn’t intend to forgive her for that, or for leaving all those years ago.

Isaac Mast has never forgotten his first love, Katrina Yoder. When she comes back to settle her dad’s affairs, he’s reminded of his life before Katrina left the Amish community. However, a lot has changed. He married, had a daughter, lost his wife, and his life moved on. He’s committed to his Amish community, but Katrina is an Englischer, with both feet firmly planted in the modern world.

When a revelation about Isaac comes to light, Kathy decides to take things into her own hands. Will her decision destroy even the friendship they once had, or possibly bring them together?

You can learn more about Miralee’s books and this weekend’s Hallmark movie from her recent Following God’s Call to Write podcast with Alison Treat and by viewing the movie trailer below.

When asked what advice she’d give someone who is writing their first book, Miralee said, “Be willing to accept constructive criticism from published authors who are farther along in the journey. Join a solid critique group to help hone your craft and don’t be afraid to spend money on a content edit after it’s gone through a few rounds of critiques. It will make all the difference in attaining a contract. Never tell a publisher or agent they need to contract your book because God told you to write it or that God told you it belongs with their house. That is almost a guarantee they will barely glance at it. They want to see what you can do, and if they’re a Christian house, they’ll be praying about their acquisitions. They need to hear from God themselves, not be told what He said from anyone else.”

Miralee’s writing goal has always been to touch lives for the Lord. Involved in women’s ministry and counseling for years, she sees her writing as another avenue of ministry outreach. Therefore, in the future, expect more outstanding books from this prolific author—and not only her own. As the owner and publisher of Mountain Brook Ink, a traditional publishing house, she aspires to help others reach their own writing goals. In the past seven years, her company has published 80+ books. A number of them have garnered awards and reached best-selling status.

Miralee invites you to connect with her on her website at www.miraleeferrell.com and to check out her books on her Amazon Author page.

Follow Your Heart, a contemporary Amish romance, airs this weekend on the Hallmark Movies & Mysteries Channel. Meet the book’s author, Miralee Ferrell, in this week’s Author Snapshot. Click To Tweet