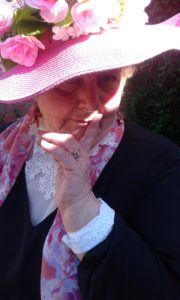 Contemporary Romance author, Patricia Lee, was born in Eugene, Oregon. Today, she lives just across the Willamette River in Springfield. Her early fascination with words began when she learned how sentences worked together, and she wrote her first short paragraph. Her first grade teacher recognized her budding potential and gave her a bookmark with the inscription: “Keep writing, Patty.” She’s not stopped since.

Her professional writing career began in middle school, when she became her school’s stringer reporter and wrote for the local newspaper, earning ten cents a column inch. Later, she received her B.A. in Journalism from the University of Oregon and went on to work as a tabloid newspaper editor at her local church. “My first book took about three years to write and definitely was a practice run. It has not been published, nor do I expect to pitch it.” Four published books later, Patricia has no regrets.

In 2017, her debut novel, An Anchor On Her Heart, kicked off her Mended Hearts series. Yesterday, July 31, 2020, Love’s Autumn Harvest, the fourth book in the series released.

“Around the time of the book’s inception, I was challenged by a conference speaker to write something different. To shake up my genre. I visualized Eileen McKintrick, a widow who liked to serve, and her brusque neighbor Marshall Frye who wanted to be left alone. I threw in Eileen’s best friend, Hillary Shepherd, a lonely divorcée who had her sights set on the widowed bachelor. Sparks began to fly and soon a story was born that will have readers laughing in their coffee.” 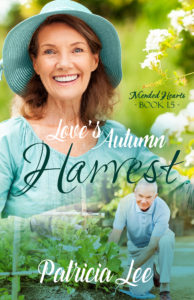 Tap on image to order

Looking forward, Patricia recently completed her first time-slip novel which covers the history of her great-great-great-grandparents and their trek west to homestead in the Willamette Valley. “I’ve wanted to commit this story to fiction for a long time. It is being shopped by my agent, and it’s sequel is my current work in progress.”

When asked for her advice for writers struggling with their first book, she said, “Learn all you can about writing. Read a craft book alongside a book by an author you admire. You can learn a lot by reading another’s work.”

Patricia invites you to connect with her on her blog at www.authorpatricialee.net or check out her books on her Amazon Author page.

“Marshall had once told Kenny that church socials were nothing more than open range hunting. Widows with pies packed in baskets set their sights on the eligible men in the room, hoping to bag a body.” —Marshall Frye, Love’s Autumn Harvest

A first grade teacher recognized the budding potential of today’s author and gave her a bookmark with the inscription, “Keep writing, Patty.” Check out today’s Author Snapshot and meet Patricia Lee. Click To Tweet