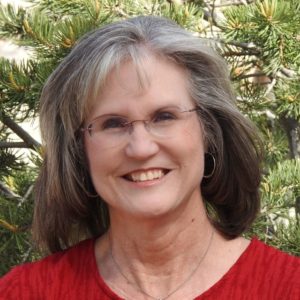 The book, Little Women, inspired award-winning romance author, Norma Gail Holtman to become a writer. “I wanted to be just like Jo March.”

Well, she isn’t Jo—she’s Norma Gail, doing what she aspired to do a long time ago. What more could she ask?

Born at Nellis AFB in Las Vegas, Nevada when her father was stationed there in the Marine Corps, she now lives 7200 feet above sea level in the mountains outside of Albuquerque, New Mexico. It’s the perfect setting for a girl with a pioneer and all-things-Old West spirit.

“One of my favorite things to do is head up a 4×4 road in my Jeep and explore. I’m the happiest when I’m in the mountains and away from cities.

I grew up with a huge extended family that gathered at my grandparents tiny, weird little house every Sunday afternoon, easily 20-30 people crammed together in three rooms. My great Aunt Lete was a storyteller. She grew up in turn-of-the century, southwestern New Mexico at a time when it was populated by pioneers, cowboys, and descendants of people who lived there before the Treaty of Guadalupe Hidalgo ceded it to the United States. She watched from her bedroom window as five men rode into the corral and ambushed her father and two older brothers. With her father and oldest brother dead, and another brother critically wounded, she jumped on one of the gunmen’s horses and rode for help in a day when law and order were in short supply, and the sheriff was over one hundred miles away.” 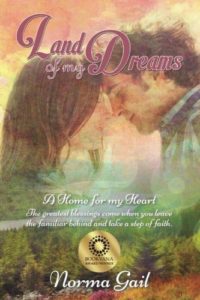 Following her first writer’s conference in 2012, she received a contract from Lighthouse Publishing of the Carolinas for her debut novel, Land of My Dreams, which released in 2014. It’s a timeless story of overwhelming grief, undying love, and compelling faith which spans the distance between New Mexico’s high desert mountains and the misty Scottish Highlands.

When asked for her advice to writers struggling with their first book, she said, “Never give up. My second book actually was much more difficult to get published, but despite rejections, I never gave up and kept on attending writer’s conferences. They connected me with other writers, helped me feel that I wasn’t alone, and gave me insight into how to improve my writing. Although all of my rejections came at writer’s conferences, I was surrounded by others who had been there, who prayed for me, and encouraged me to keep trying.” 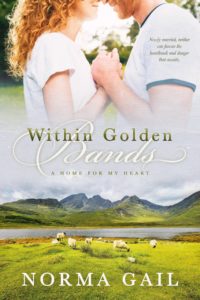 In Norma Gail’s second book, Within Golden Bands, newly married Bonny MacDonell struggles to hold her marriage together after the threat to her husband and the loss of their child. When faith in love is not enough, where does she turn? Preorder Within Golden Bands and find out. It releases May 19th. (Tap images to order.)

Looking ahead, Norma Gail, hopes to write a historical series based on old family stories. “I have uncovered the truth of what lead to the terrible day that forever altered my family. Those people live on in my heart and mind, and in the pictures above my desk that remind me of my roots. It has been a wonderful and enlightening experience. I’m excited about getting to work.”

She invites you to connect with her at www.normagail.org  and to check out her books on her Amazon Author page.

“If we fail to accept what God sends with trusting hearts, we refuse His greatest blessings.”                 —Bonny MacDonell from Within Golden Bands

She sat at her Aunt Lete’s knee and listened to her recount the terrible tale of murderers who were never brought to justice. Check out today’s Author Snapshot and meet Norma Gail Holtman. #authorsnapshot #normagail #historicalfiction Click To Tweet