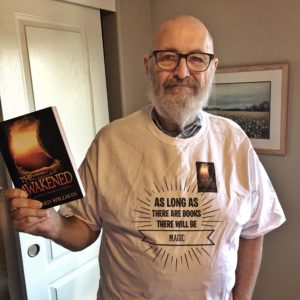 Christian Speculative Fiction author, Richard Spillman, was born in Tacoma, Washington. As a child, he read the works of Hugo Award-winning, Science Fiction author, Isaac Asimov, and dreamed of being a writer. But his life would take a far different turn.

After high school, he earned a Ph.D. in Computer Science and Engineering, and for the next thirty-five years taught at several universities. “It was quite a ride,” and one that “if not for Jesus being by my side” should never have happened. Richard harbored a secret that, for most of his life, he kept hidden under a blanket of shame.

“Then, I discovered that God could use my story to help others. Now I share it freely, and not only have I seen it help others, sharing it brings healing to me.”

From ages six to fourteen, Richard was trafficked by his mother to a pedophile group run by his uncle. “Many therapists have told me there are usually only two outcomes for children abused at this level—drugs or suicide. Surprisingly (only to those who do not know Jesus), I avoided both. Sadly though, I have thought of suicide from time to time when the pain and the fear are too intense to endure. But in those times, I call on the name of the Lord, and He’s always been there to deliver me and bring me peace.”

About ten years before Richard retired, God called him into missions. While working through his church among the homeless on the streets of Tacoma, he felt God telling him to take some of the people he was working with overseas. “It was an outrageous idea doomed to fail on so many levels, but I said yes, and it worked.”

Several years ago and a couple of days before Richard’s team was scheduled to fly to the Philippine jungle to share Jesus, he received word that one of the pastors they were to visit had been kidnapped by a local ISIS group. He was advised not to come, but after much prayer the team decided to go.

“When we arrived, we found out the pastor had escaped, leaving only his cell phone behind. We decided to protect him and his family while setting him up in a different, safer area of the jungle. Soon the phone calls started. It turned out the local ISIS leader discovered our plans to serve in the area. He started calling us, telling us to back off and return the pastor and his family (which included eight kids, a three-month-old baby among them). In case we refused, he wanted to be sure that we knew he was hunting us with the intention of beheading us when caught. While the calls continued for the entire week we were there, we did not give in. We continued to minister in the villages. There is a lot more to the story, but it ended well. Our friends in the Philippines were all safe, the ISIS commander was caught in a firefight with the Philippine Marines, and my team returned to the USA without a scratch.”

Though safe, Richard was now confused, distressed, and unsettled. “I’m just a normal person. Why would anyone want to hunt me down and kill me? That was when writing became more than a hobby. It was a mission to try to understand the depths of such evil.” 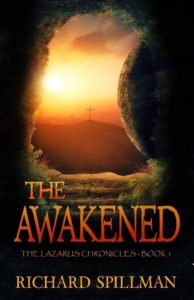 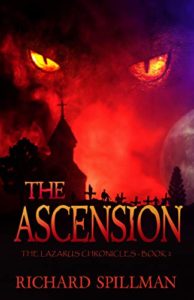 So he sat down to write. Not specifically this story, but a story of the larger conflict between good and evil on a wider stage. Thus, The Awakened was born. Published in 2018 by Mountain Brook Ink, it’s now available within their new Speculative Fiction line, Mountain Brook Fire.

“In Hebrews, it says that it is appointed to man to die once. If I understand it correctly, then what happened to Lazarus and all the others after Jesus brought them back? The Awakened suggests a special answer.”

Although writing his first full-fledged novel came with its share of difficulties, Richard found it to be “a lot of fun” and authored a sequel, The Ascension, released last year. (Tap on images to order.) As for future writing projects, ideas that include mystery, fantasy, and comedy are piling up. “Come to think of it…the world is my genre.”

When asked what advice he would give aspiring authors, he said, “Never give up and go to as many authors and readers conferences as you can.”

Richard invites you to connect with him on his blog at www.spillmanauthor.com and to check out his books at Amazon Author page.