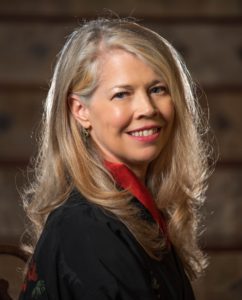 It might surprise one to know that this Denver born, now Arizona author was once a nationally ranked ice dancer. While a teenager, Linda Thompson, could be seen swirling across the ice and stamping out her favorite dances, the Paso Doble and the Tango. Although she’s long since hung up her ice skates, she still loves it when her husband dips her, and, at times, she can be found rollerblading against the backdrop of a cloudless Arizona-blue sky.

Another surprising item of interest is that Linda’s university degree is in electrical engineering. “I’ve always been a little conflicted about whether I’m a left-brain or a right-brain person. I built my first career primarily based on my left analytical brain. When I hit fifty, my right brain rebelled. Hence, the novel.”

The works of C. S. Lewis were this award-winning author’s early inspiration. Enraptured by Lewis’s gift for creating deep analogies that illuminate spiritual truth, she and her husband loved sharing these and other book series with their two children. It was particularly meaningful to share middle-grade books with her son, who loved the stories but struggled with reading. “It’s kind of funny. I sort of thought I’d write fiction aimed at teens. But the story the Lord laid on my heart is kind of the opposite of a Young Adult story.”

Linda’s genre is WWII-era historical fiction. Her first book, The Plum Blooms in Winter, took six years to write. Although the depth of research required to produce her story was a contributing factor to its long creative process, the primary reason was her “effort to learn the craft of writing fiction.” Her debut novel’s exciting awards season is a testimony to the fact that she learned well. 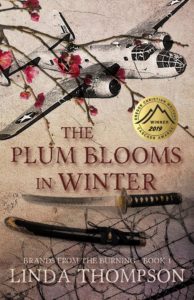 The Plum Blooms in Winter won the Cascade Award for Historical Fiction and was a finalist for the Carol, Christy, and International Book Awards. “I found it particularly humbling, as in a very real way I am not the author of this story. While the book is a novel, the bones of the story are true. Any honor and glory should go to the real men and women who lived the story, and to the God who worked so powerfully in their lives.”

Although “blown away” by the attention her first novel received, its accolades have escalated the pressure around writing a second book—but pressure is no stranger to this life-long competitor. “I am so blessed to have a three-book contract with Mountain Brook Ink—a wonderful home for debut authors. I’m intrigued to see what kind of journey the Lord takes me—and my readers—on with these next two books.”

The unifying theme behind the settings of Linda’s novels is people dealing with the dramatic aftershocks of history’s greatest war. Currently, she’s writing about the Pacific Theater and the U.S. occupation of Japan and eventually plans to move the series to Israel.

In keeping with the celebration of her book’s first birthday on December 1st, Linda invites you to join her Red Carpet Readers Club. By subscribing at http://www.lthompsonbooks.com/giveaway-midway-dvd/, you’ll be included in her Book Birthday Giveaway for a chance to win a DVD of the Midway movie.

When asked to advise writers struggling with their first book, she said, “People don’t become Olympic athletes or concert musicians without professional coaching. Becoming a published author is no less demanding. Don’t think you can write quality fiction without good coaching from writers who have traveled the road. And unfortunately, you’re probably going to have to pay for some of it.”

Linda invites you to connect with her on her website at www.lthompsonbooks.com and to check out her book on her Amazon Author page.

“I can hammer out words and my publisher can bind them into a book, but only the Lord can produce a spiritual harvest.”