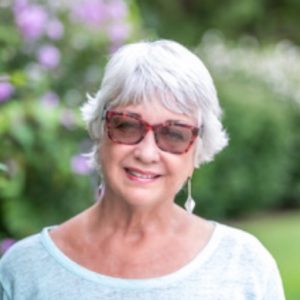 Award-winning author, Sharon Leaf, hasn’t been everywhere, but I’m sure it’s on her list. This quintessential “lady on the run” made her first cross-country trip in 1946 at five-months old and hasn’t stopped moving since. After riding the rails with her parents from South Carolina to Southern California, she resided along the Pacific coast until her Southern roots beckoned her home. She and her husband, Rob, have settled (I use that term loosely) on Lake Murray in South Carolina. They have a blended family of four grown children, four grandchildren, and three great-grandboys.

Inspired by her mother’s love for reading and writing short stories, Sharon kept her writings under lock and key in her diary until she ventured out to garner all A’s on her book reports.

In the 70s, she became an avid runner and taught a running class that inspired her to write Lady on the Run. (Are we surprised?) Her hope is that the message within the book will encourage women of all ages to run or walk their “physical and spiritual race” with joy and at their own pace! “Life isn’t a sprint, it’s a marathon.” After several unforeseen life events caused her to shelve Lady, she recently dusted off her non-fiction manuscript and turned it into a novel for which she’s seeking publication.

Sharon considers herself a fluttering butterfly and a late bloomer, but she’s a RED (Retired-Extremely-Daring) and eargerly anticipates the next adventure. In spite of her nomadic lifestyle, she’s contributed to several anthologies, received a theology degree at age sixty, and published her first novel, Lady and the Sea, at sixty-five. She also writes about travel, volunteering, and health for the Retirement and Good Living website. Sharon has proven it’s never too late to fulfill another dream and states, “Retirement can be fun and exciting when we work together with Jesus to obtain our physical and spiritual strength.”

Besides visiting over twenty countries, Sharon and Rob attended an international Bible college in Sweden, traveled on the Trans-Siberian Railway to share the Gospel and distribute humanitarian aid, and volunteered on a WW2 ship helping transport Russian Jews from the Black Sea to Israel.

Their latest adventures have taken them across the USA in their 40-foot motor home. “We bought it on a whim, but God had His hand in it.” They volunteer and travel nationwide with the first-response team Christ in Action offering flood and disaster relief. They recently spent two months in Virginia helping volunteers set up a new Christ in Action facility.

Sharon’s advice for new writers is, “Write what you know. Write what moves you. Write faithfully, and when you become overwhelmed by the whole writing process, as we all do, take deep breaths, and pray.” She also suggests joining a critique group such as Word Weavers International.

And there’s more. But, while you check out Sharon’s books on her Amazon Author page and connect with her on her Lady Traveler blog, I’m heading for a nap.

“Man cannot discover new oceans unless he has the courage to lose sight of the shore.” —Andre Gide