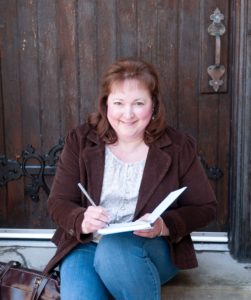 Award-winning, Ohio-born author Sandra Merville Hart, has lived in the “Buckeye State” all of her life except for living in Tennessee as a toddler for about a year.

She shares that when she was three, she got lost in a large amusement park. No one was amused.

”It  was about supper time when I became separated from my family. Crying, I walked around looking for them. Someone grabbed my hand but I ran away. When it got dark, I knew I was lost forever. I’d never see my mom and dad again. I had to find a place to sleep, so I kept walking. Then another hand grabbed me and wouldn’t let go. It was my uncle, who took me straight to my family. As you can imagine, my mom cried when she saw me.”

But not Sandra. She was through crying. She’d been found and was going to sleep in her own bed—after she ate her first ever snowcone bought by her uncle.

For this historical romance author, writing is an unquenchable thirst. “History fascinates me. I enjoy learning about history in my research and sharing it with my readers through story. In fact, even my contemporary romantic suspense (not yet published) contains historical elements.”

When not writing Sandra can be found in her kitchen roasting chestnuts or whipping up historical recipes, which she shares on her Historical Nibbles blog. She invites you to drop by for tempting bites of American history as well as book reviews. And to whet your appetite for her third Civil War romance novel, the following quote is from A Musket in My Hands, which released this past Thursday, November 8th.

“Zach’s original regiment, the Twenty-Seventh Tennessee, had lost so many men that those remaining were now part of the First Tennessee. Bitterness spurted up like bile. This dratted war had taken the best the South had to give … and demanded more.”

A Musket in My Hands can be purchased along with Sandra’s other books on her Amazon Author page. Her second Civil War romance novel, A Rebel in My House, set during the Battle of Gettysburg, won the 2018 Illumination Silver Award and also placed second in the 2018 Faith, Hope, and Love Readers Choice Award.

She is Assistant Editor and a contributing writer for DevoKids and serves as column writer for “History in the Making” at Almost an Author. She led a Word Weavers online critique group for several years and is a member of American Christian Fiction Writers.

Sandra often drags her husband along on her adventures to uncover little-known yet fascinating historical facts to include in her stories. Thankfully, he enjoys these fact-finding missions. This summer they visited a beautiful North Carolina Beach to celebrate their silver wedding anniversary. “After we left, Hurricane Florence came through—we missed the terrible storm by only a few days.”

A piece of history, I suspect, this historical writer was happy to leave behind.