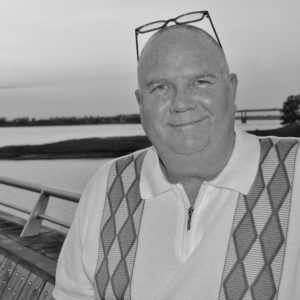 Steve grew up on a cotton farm in the flatlands of the Arkansas Delta. After finishing school with a master’s degree in mass communication, he broke his mother’s and grandmother’s hearts when he became the first in four generations to work outside the field of public education. His first job was as a copy editor at the Gannett newspaper Florida Today.

At 30, he took his dream job as a press secretary on Capitol Hill and later worked as a non-profit major gifts fundraiser. Still engaged in the family cotton business, he’s worked mostly as a freelance writer since 2012. He and his wife, Dana, were featured on the HGTV series House Hunters International.

In 2015, Steve walked 500 miles across Spain on the ancient pilgrimage of the Camino de Santiago, a trek that concludes in Santiago de Compostela where it is believed the remains of St. James the apostle of Jesus are buried. His book about that experience, Pilgrim Strong: Rewriting My Story on the Way of St. James, reached number #4, #5 and #6 in three different Amazon categories and it was named 2018 Director’s Choice Non-Fiction Book of the Year at the Blue Ridge Christian Writer’s Conference. Connect at the following links to view the Pilgrim Strong Book Trailer and to purchase the Pilgrim Strong book on Amazon, or follow him at his Pilgrim Strong Website .

Steve is now in Spain serving in the mission field for three months caring for pilgrims as they conclude their walk on The Way. He’s also working on his next book proposal and is hopeful for literary representation before the end of this year.

“Few experiences will bring a person to a full knowledge of their senses as traveling alone. Maneuvering a far-away land will heighten your awareness at every level. It’s the thing I’ve learned over time that brings me most alive. It’s not so much the getting away from things as it is the freshness of new, uncharted experience. Traveling alone builds confidence, character, and offers a perspective on the world that is achieved no other way. Comfort zone boundaries are demolished and necessarily overcome when you have no idea what to do next, and no other choice than to figure it out. But there is nothing that stirs the blood as standing at the helm of your destiny.”  —Steve Watkins, Pilgrim Strong