I See the Moon 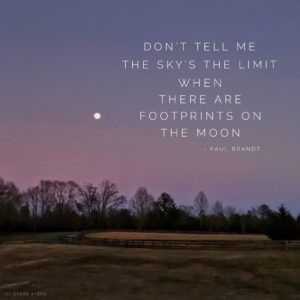 “Jesus looked at them and said, ‘With man this is impossible,
but with God all things are possible.'”
Matthew 19:26

The moon fills me with awe and wonder. I’ve looked upon it, walked by the light of it, and fallen in love under it. As a child, it would’ve been easier for me to believe in the man in the moon, than a man on the moon. As of today, twelve men have left footprints on its powdery surface and have planted six American flags in its lunar soil.

In 1972, Astronaut Gene Cernan of Apollo 17 was the last man to walk on the moon. Before climbing the lunar ladder for the final time, he etched his daughter’s initials in moon dust. Because the moon has no atmosphere those initials will remain until the moon is no more. Unbelievable, but true.

As residents of Cape Canaveral in the early 70’s, my husband and I witnessed several Apollo launches—all remarkable and memorable experiences—ones that centuries before would have been considered impossibilities. Even then, there were naysayers. Some stated that the live television feeds of the lunar missions were simulated and the moon landings were hoaxes. Though their eyes saw, they didn’t believe.

The disciples walked with Jesus for three years. They witnessed many miracles, yet their doubts still surfaced. Jesus addressed their confusion. “No chance at all if you think you can pull it off yourself. Every chance in the world if you trust God to do it” (Matthew 19:26, MSG).

Do you face a seemingly impossible situation? Is it hard for you to believe your hopes and dreams will materialize? Do voices of naysayers ring in your ears? Trust God. What we think is impossible is no challenge to the God of impossibilities.

Next time doubts arise, look at the moon. The footprints, the flags, and the initials are still there.

Do you see them?

But I bet you believe.

Now it’s your turn. Share a Scripture verse that you use to counter doubts when facing an impossible situation?