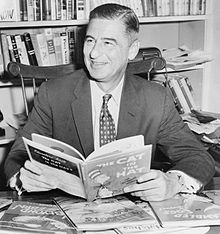 Theodor Seuss Geisel was an American author, political cartoonist, poet, animator, book publisher, and artist, best known for authoring more than 60 children’s books under the pen name Doctor Seuss. The “Dr.” in “Dr. Seuss” was in homage to his father’s hope that his son would get his PhD. Geisel instead dropped out of the PhD program at Oxford where he was pursuing a PhD in English. He later received several honorary doctorates.

Though he devoted most of his life to writing children’s books, Geisel had no children of his own, saying: “You have ’em; I’ll entertain ’em.” Holding true to his promise, by the time of his death, his books had sold over 600 million copies and had been translated into more than 20 languages.

In February 2015, Random House Children’s Books announced it plans to publish a new Dr. Seuss book entitled What Pet Should I Get? after the manuscript and sketches were found by the author’s widow in the couple’s home.

“I like nonsense, it wakes up the brain cells. Fantasy is a necessary ingredient in living, it’s a way of looking at life through the wrong end of a telescope. Which is what I do, and that enables you to laugh at life’s realities.”  Dr. Seuss Biography