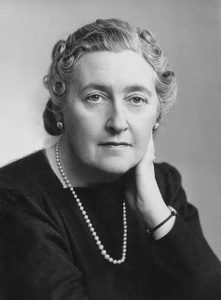 Born: September 15, 1890 in Torquay, United Kingdom
Died: January 12, 1976 in Winterbrook, Oxfordshire
Mystery writer, Dame Agatha Christie, is the best-selling novelist of all time. She was a voracious reader from an early age and published her first novel in 1920. Translated in over 103 languages and selling over 2 billion copies, her books rank third only to the works of Shakespeare and God—the Bible.  Agatha Christie Biography

“There was a moment when I changed from an amateur to a professional. I assumed the burden of a profession, which is to write even when you don’t want to, don’t much like what you’re writing, and aren’t writing particularly well.”