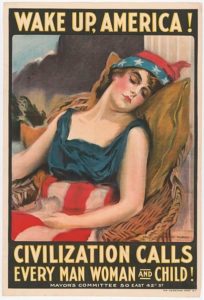 “Be dressed ready for service and keep your lamps burning, like servants waiting for their master to return from a wedding banquet, so that when he comes and knocks they can immediately open the door for him. —Luke 12:35-36, NIV

In 1917, New York artist, James Montgomery Flagg painted the World War I poster Wake Up, America. A young lady is shown sleeping while the storm of war brews behind her. Dressed in red, white, and blue apparel, she wears a Phrygian cap, the symbol of liberty. Flagg painted the poster with hopes that it would inspire Americans to wake up and do their part for the war effort. In response to calls like his, thousands of men, women, and children stepped into their respective roles. The dedication and unity of those who answered the call to serve changed the tide of war and secured America’s victory and the freedoms we now enjoy.

Today, another storm brews across our land. America is undergoing a tremendous shift in its social, political, economic, and religious atmosphere. As we move farther and farther away from the godly principles upon which our nation was founded, there is a steady rise in division, discord, and strife. The Scripture text exhorts believers to be ready to serve and be lights in the dark days prior to Christ’s return. Are you prepared for what lies ahead? Am I? Are we ready to respond to God’s call to serve? Will we open the door to His daily presence in our lives and move forward in the power of His Spirit? 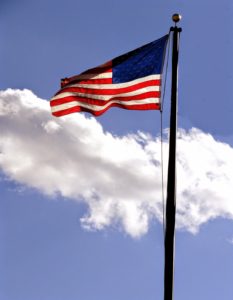 In Genesis 14, when Abram heard that his nephew Lot had been taken captive by the enemy, he rallied his troops and stepped out to rescue him. Yes, Lot chose to live in the wicked city of Sodom, but Abram never gave up on him. Because of his unconditional love and valiant effort, Lot’s freedom was restored.

“Who shall separate us from the love of Christ? Shall trouble or hardship or persecution or famine or nakedness or danger or sword? No, in all these things we are more than conquerors through him who loved us” ( Romans 8:35, 37).

Wake up, children of God! United in prayer and service, we can change the tide of the spiritual war raging around us. Fight for the souls of those you love. Christ gave His all for their freedom. The enemy is a defeated foe. Believe it. Suit up. Step out. Step into the role God has for you. His presence is with you. We are more than conquerors.